Australia's top level enquiry into its banks (officially known as the Royal Commission into Misconduct in the Banking, Superannuation and Financial Services Industry) has resulted in the Chairman and the CEO of the National Australia Bank quitting – and an interesting study in crisis communications.

Overall, considering the alternatives, Dr Henry did well. Obviously, it would have been better for NAB to have treated its customers better to begin with. But that's the nature of crises. It's too late for "would haves" and "could haves" when you are in the moment and fronting the TV cameras.

Of course, the ultimate in crisis communications would be that neither he nor CEO Andrew Thorburn, who also quit, will collect million-dollar severance payments as part of their resignations. 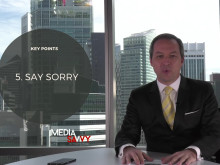