People who are saying LinkedIn Live is late to the video live streaming party are missing the point. The network is designed for business people sharing meaningful, valuable content - and that will apply to live video, too.

I cannot overstate the significance of this. Discount all those headlines that say LinkedIn is late, that it is imitating YouTube, or "better late than never". Senior business leaders who want to make a success of LinkedIn Live will have to take an entirely different approach, and one which they should apply to all their communications.

TechCrunch, which broke the story, writes: "The plan is to cover conferences, product announcements, Q&As and other events led by influencers and mentors … earnings calls, graduation and awards ceremonies and more."

Mashable adds: "The social network is clearly looking to shape the content streamed on the service, at least at first, by using it to support users looking to broadcast conferences, company announcements, earnings calls, and other similar events."

The biggest winners will be organisations which live stream engaging, relatable business content, such as quarterly earnings announcements and conferences (this will eat the lunch of Conference Service Providers in the process).

But in producing it, you have to start from scratch. When producing a video stream for LinkedIn Live, think "Harvard Business Review" and "TED" - not "viral video" and "quirky skits".

In fact, you need to go one step further. No one has yet cracked live video streams as a replacement for face-to-face interactions. As Simon Sinek writes in Leaders Eat Last:

"Real, live human interaction is how we feel a part of something, develop trust and have the capacity to feel for others. It is how we innovate. It is why telecommuters never really feel like they are a part of the team as strongly as the ones who go to work every day. No matter how many e-mails they send or receive, no matter how kept in the loop they are, they are missing all the social time, the gaps, the nuance… the humanity of being around other humans." (page 141)

As a TV producer let me tell you: it's very difficult to build "social time, gaps and nuance" into a live stream. But let's try:

Just as you know LinkedIn is different from Facebook, so too you should approach your LinkedIn Live feeds differently from Facebook Live. If you don't, you are doing yourself and your sophisticated business audience a disservice. 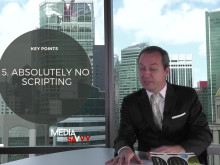 People who are saying LinkedIn Live is late to the video live streaming party are missing the point. The network is designed for business...