Singapore's fast internet and cloud hub status has a dark side: it is increasingly the place from which malicious DDoS attacks are carried out.

As Director, Security Product Management, Asia Pacific of CenturyLink, he stopped by the Money FM 89.3 studio to tell listeners about the threat of Distributed-Denial-of Service attacks in the age of Internet of Things (IoT) and 5G.

Cheah pulled off an all-round good performance, which is why we nominated him for the Hong Bao Media Savvy Awards 2019.

Scroll down to see my six reasons for nominating him:

The Hong Bao Media Savvy Awards 2019 resumes with our second round of nominations. At the same time, Hong Bao Media has launched the awards in Malaysia and fine-tuned the categories to:

Here are six observations on his performance:

If you know Wai Kit Cheah, share this article with him and congratulate him on being nominated for the Hong Bao Media Savvy Awards 2019.

Business has moved on to B2B eCommerce and to mobile commerce, but when it comes to getting your message across, some things just never change.

You would think that an interview with McDonald's would be a fairly lighthearted and easy-going affair. But Agatha Yap certainly got some upsized questions when she appeared in an interview on Money FM 89.3.

Medtech startup Eko.ai beat almost 2,400 others from more than 120 countries to win the startup pitching competition SLINGSHOT at the Singapore Fintech Festival last week - and their pitching skills weren't just confined to the event.

Crystal Lim-Lange gets the job done with soft skills interview

Job seekers are frequently told to stay relevant by updating their soft skills. But what about employers? Our shortlisted candidate of the Hong Bao Media Savvy Awards 2019 in the Best Broadcast Awards this week appeared on CNA938 to talk about the top recruitment mistakes to avoid. 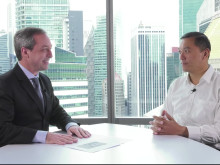