Volkswagen might have done a lot of things wrong when it rigged the diesel engines of 11 million cars to skew emissions test results in its favour.

But in terms of its communications it has done a lot of things right. It has demonstrated the four things which so many other companies – especially here in Asia – find so hard to do in times of crisis.

Volkswagen came out straight away admitting that engineers and technicians acted criminally.

Many details are still unknown, such as precisely how they managed to manipulate emission readings, the names of the individuals who were responsible, or how they are going to compensate car owners.

They didn't "buy time" through obfuscation.

They didn't issue statements saying they are "investigating" the cause of the crisis, especially when it is already obvious.

You can't sweep this under the carpet. If the traditional media don't find you out, social media surely will.

Every day you delay admitting you were at fault is an extra day that the anger of consumers grows, the damage to your brand grows, and (in some jurisdictions) your damages bill grows.

By that I don't mean to ask your corporate communications department to "issue a statement of apology", where an anonymous author can hide behind the corporate letter head.

In Volkswagen's case, the new CEO, former CEO, Deputy Chairman and board members personally say sorry to camera, either on their news page or in TV interviews. They didn't run away from media interviews. And you can tell whether they are being sincere.

Think of the crashes of SQ6 and MH370. What passengers wanted more than compensation was to hear someone at the airlines say sorry.

If you don't say sorry, all your actions to remedy the situation will sound hollow and insincere.

The sooner you say sorry, the faster you can move on to remedy the situation.

Victims of disasters cast around for meaning, trying to find an explanation why the disaster happened to them.

For as long as you don't explain what happened, consumers will speculate and possibly come up with conspiracy theories.

Be clear and transparent, so consumers can move on.

Volkswagen itself used these words in its statement from September 25: "We will co-operate fully with the responsible agencies with transparency and urgency, to clearly, openly and completely establish all of the facts of this case."

Now it has to follow through and turn these words into action.

Volkswagen board member Olaf Lies told the BBC: "We are surely going to have a lot of people suing for damages. We have to recall lots of cars and it has to happen really fast."

Details are still to be announced, but at least we know where this is heading.

We are not blocked by a wall of silence from the company, leaving us casting around wondering whether a recall is going to happen.

None of this is to excuse Volkswagen from rigging emissions test results. But their crisis communications plan is at least one silver lining.

So, remember the three R's of crisis communications:

And have a crisis communications plan in place.

No one wants crises to happen, but as Volkswagen board member Lies said in the same BBC interview: "We only found out about the problems in the last board meeting, shortly before the media did. I want to be quite open. So we need to find out why the board wasn't informed earlier about the problems when they were known about over a year ago in the United States."

What crisis is waiting around the corner in your organisation?

And what is your plan of action when it happens?

Mark Laudi is a former CNBC television presenter and producer, who emcees and moderates many business events in the Asia Pacific region. Media trainer to C-level executives in Asia and the Middle East, he is the Managing Director of Hong Bao Media (Holdings) Pte Ltd [HBM]. HBM a full service media consultancy that produces content marketing videos in Singapore and Malaysia. 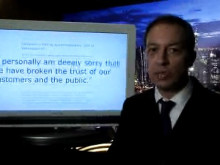 What Volkswagen is doing ...

The first of our series called 'Media Savvy'. In this episode we focus on how Volkswagen has handled the emission scandal. What are the t...