The question we were asking today is when is it ever okay to use a crisis or marketing.

Before we discussed crisis marketing, we took in audience reactions to marketing generally. In truth, no matter what you do in marketing these days you're bound to get criticised. We looked at some examples of marketing campaigns which seemed fairly low risk, but which still ended up in criticism for the brands. Even among APACD members who gathered for our workshop, there was already a great diversity of views. So, the base position was that no matter what you do, you're going to get criticism.

Then we started to look at some of the examples of crisis marketing that had misfired, and we came to the conclusion that all of the crisis marketing campaigns which received a lot of criticism all had certain things in common.

Crisis marketing lends itself best to public relations, as opposed to marketing. The communications department anyway needs to kick in, in the event that something goes wrong with a marketing campaign. So, ideally, if you really are going to leverage a crisis for communications put it in the hands of your PR/comms experts. 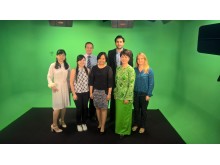 Our group of participants...