Like many of your readers, I am at home everywhere and nowhere. I was born in Johannesburg to German parents. I learnt to speak English when I moved to Perth at age 9. At 17, my family moved back to Germany, but I returned to Perth after a year, cashed in my return flight, enrolled at Curtin University, and upon graduating landed a job as an ABC Radio current affairs show host. I was 21. Four years later I moved to Singapore to work in local radio. I then joined CNBC, where I produced and anchored Squawk Box, headed the Sydney Bureau and reported live on-location.

And when I was tired of talking about business, I became an entrepreneur and started doing business.

What excites you most about your industry?
Which one? As an entrepreneur, I don’t see myself glued eternally to one industry or another. You can’t help but continuing to explore. That’s what excites me.

What’s your connection to Asia?
Well, it all started in late December, 1996 when I was standing at The Peak in Hong Kong, watching planes come into land at the old Kai Tak Airport. And it struck me that I really needed to get out of Perth! But I chose Singapore because I wanted to learn Mandarin, not Cantonese. These days, of course, if you want to learn Mandarin in an immersive environment you’d move to China, but that wasn’t an option back then. Least of all for a Western broadcast journalist.

So I arrived in Singapore in November 1997 for a one-year stint as presenter/producer at what was then called Radio Corporation of Singapore, now MediaCorp Radio. 17 years, one wife and two children later, I’m still here. There is so much opportunity, so much potential. Living in Singapore I feel empowered, and I have now spent almost half my life here. This is home, truly (cue National Day theme song).

Favourite city in Asia for business and why?
My vote is for Singapore for the usual reasons: the process-driven efficiency of the public service. The ease of getting around town. And when arriving at Changi Airport, I routinely manage to get from plane seat to taxi seat in less than ten minutes; five, if I don’t have baggage to collect. I mean, where else in the world can you find that?!

But at the end of the day, entrepreneurship thrives at the intersection of the battle to survive and the confidence to succeed. And that’s the space Singapore occupies. We’re a little red dot, so we live on the edge. But we have all the resources and conditions we need, in order to make it.

What’s the best piece of advice you ever received?
Cut losses. When you’re an entrepreneur, it’s harder to say no to opportunities than to say yes. And the emotional attachment you develop for a project, a product or a service will kill you if you don’t manage your costs.

So yes, it’s the three Cs: Costs, Customers and Cash flow. At the end of the day, that’s what it comes down to.

Who inspires you?
I’m drawing a blank. When you’re an entrepreneur, you have to inspire yourself. Life as an entrepreneur can be quite lonely. So, you are responsible for motivating yourself. If you spend your time worshipping Steve Jobs or Mark Zuckerberg or whoever, you’re not leading, you’re following. That’s the opposite of entrepreneurship. Besides, none of the big names are going to rescue you with some inspiring words or a bag of cash when things go pear-shaped.

It’s the qualities which I witness in a range of people that inspire me: people who prioritise candor over pretense, who prefer substance over form, and who have the courage of their convictions.

What have you just learnt recently that blew you away?
The New Horizons probe that flew by Pluto and took those amazing photographs of a planet that wasn’t even discovered until 1930. That was a remarkable moment in history, which unfortunately passed under-appreciated. The media seemed too caught up in reminding people that the International Astronomical Union (IAU) had decided nine years ago that Pluto was no longer a planet.

Incidentally, the IAU doesn’t even have jurisdiction over whether Pluto should be considered a planet or not, and there are plenty of people out there who are petitioning to have its status reinstated.

Pluto is a planet. Period.

If you had your time again, what would you do differently?
I have asked myself in the past whether I should have stayed at CNBC for longer. I mean, my company started producing internet videos when people were still on dial-up modems, and when everyone had heard of U2 and no one had heard of YouTube. So yes, we were probably too early.

But we all have 20-20 vision in hindsight, and frankly it doesn’t matter how much you think you’ve planned your business, or which school you got your MBA from. Fact is, we are all on different journeys, and I am happy the way mine turned out – warts and all.

How do you unwind?
This is like the “who inspires you” question.

Entrepreneurs don’t unwind. Every time you try, all you’re really doing is creating mind space for new ideas for your business. For example, I go for long, brisk walks. Sure, I get a work-out. But I always come home having made new connections between people and events which I didn’t see before, and I end up hastily searching for pen and paper to capture them all, to pursue them the following day.

As the title suggests, the author Stephen Batchelor focuses on Buddhist practices, not religious beliefs. It’s written in a disarmingly accessible style, with immediate application to help you get a grip on seemingly insurmountable problems.

Shameless plug for your business:
Hong Bao Media
1. We mentor leaders in developing their executive presence, and to approach media and public speaking engagements with charisma and confidence. We provide specific guidance for senior executives appearing in print and broadcast media, entrepreneurs pitching to investors, and CEOs addressing shareholders or staff (our so-called HERO program).
2. We produce current affairs TV reports at business conferences, which we call eventv
3. I frequently moderate and emcee business events as Conference Anchor.

InvestorCentral.org – a stocks news portal that keeps your investments honest

PitchMark.org – let your clients get the idea, without taking it.

How can people connect with you?
mark.laudi@hongbaomedia.com.

Please note I don’t accept LinkedIn invitations from people I have never met (especially if you’re selling appointment setting services, and no matter how pretty your profile picture is). 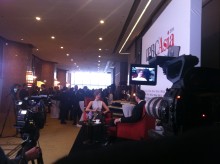 Hong Bao Media (HBM) is pleased to announce its membership with The Singapore Association of Convention and Exhibition Organisers and Suppliers (SACEOS). 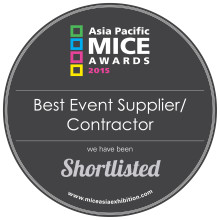 We've made the cut! Hong Bao Media has been shortlisted in the Best event supplier/contractor category at the Asia Pacific MICE Awards 2015 to be held in Singapore on September 10, 2015.

What brands can learn from British politicians 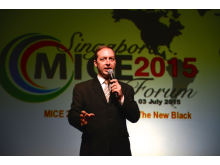 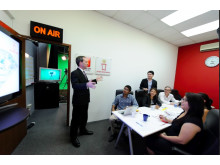 A media training session in underway in our seminar room in Singapore. 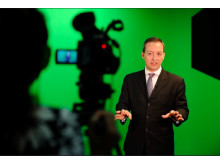 A shoot in progress at ou...

Our CEO and former CNBC presenter, Mark Laudi in the midst of a media training session. 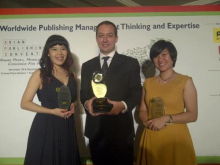 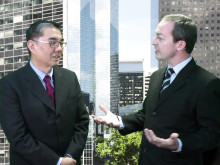 This pre-event teaser was shot at our green screen studio located at Shenton Way. Ambassador Ong Keng Yong speaks about the importance of... 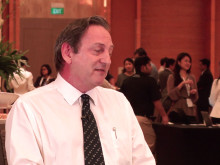 How to choose a speaker f...

Andrew Vine,CEO, The Insight Bureau talks about how the choice of speakers depends on the kind of event it is. He classifies them into tw...